Stories behind the cars – does every car have a story?

Stories behind the cars – does every car have a story? 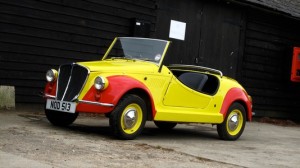 Looking for a new company car

We were looking through the lot list for the latest Silverstone Classic Car Auction and started musing – what kind of company would have these vehicles as company cars? They have fantastic stories behind them – a great talking point if you added them to your fleet.

Yes, this is thought to be the Noddy Car. Not only that, the model in the UK has a great history

Frixos Demetriou was a successful casino owner in Cyprus and the owner of the Olympic gaming club in London. While in Milan by chance, his flight to Athens was diverted, he spotted an unusual looking car by the airport and on inquiry discovered that it was a Fiat Gamine Vignale.

Demetriou was looking to diversify his business interests and sensing an opportunity he returned via Turin, securing the rights to sell Vignale products in the UK. He bought 200 cars up front paying with cash and committed to buy the next 6 months production if Vignale would manufacture the car in right hand drive form. 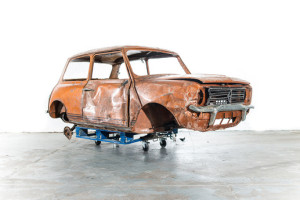 This is a great story, both for fans of the Mini Clubman and those interested in the history of motor manufacturing in the UK.

The iconic car was used by factory workers to travel around the sprawling plant until being ‘dumped’ by workers in the secret tunnel following damage to it when a storage container fell on it. However, photos of the famous ‘lost’ Mini, renowned amongst the work force, emerged last year when it was then saved by a former employee who received permission to remove it in 2012. This was just prior to the tunnel being filled in for development work that was due to take place on the site. It then became the legendary ‘last Mini’ to ever leave the site. 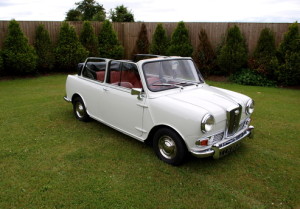 Another fantastic car back-story – it reads like a pitch for a Sunday early-evening BBC feel good drama.

In 1966 Heinz Foods Ltd held a competition for the chance to win one of 57 very special cars. Crayford Engineering was commissioned by Heinz Foods to specially produce 57 convertible versions of the Wolseley Hornet.

LLH 853D was won in the competition by Mrs Wyn Foot who lived near Southampton, it was Mrs Foot’s one and only car, she learnt to drive in it and had it all her life.

The stories behind the cars

These stories don’t make the cars drive better, they don’t improve the MPG and they don’t put them in a better company car tax bracket.  What the stories do is make us smile, make the cars that little bit more enjoyable to drive and increase the affection we feel for them. Ah, the joys of motoring!

What the papers say - the BMW i3